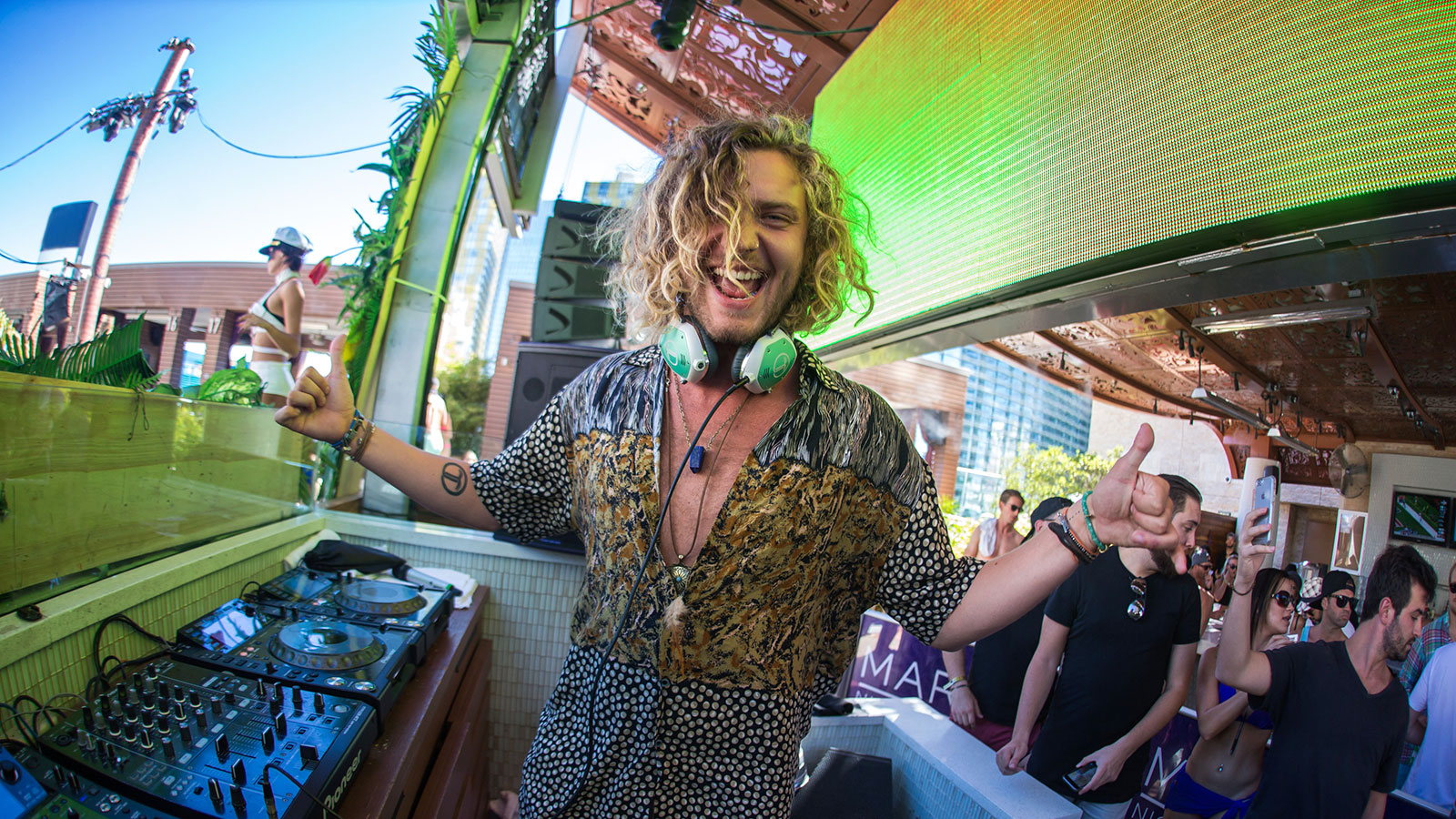 With his untamed curly hair, bold tropical shirts and infectious energy, Australian-based DJ Thomas Jack is as unmistakable in appearance as he is in his musical approach. The 24-year-old progenitor of “tropical house” has already made a name for himself as a global club headliner and producer, but his considerably humble beginnings aren’t that far in the rear-view.

To kick off our “Behind the Decks” series, we profiled the Marquee Dayclub regular, catching him in a rare moment between gigs at his home studio.

My DJ name came from: Mainly ’cause it’s me and I make music for myself and for others, and that’s connected to my personal life as well. And it sounds cool.

Gear used: I use mainly all analog gear. I’ve a got a Prophet-1, a Sub 37 by Moog, a Prophet-6, another synth that I love, a Jupiter 8, which is a classic ‘80s thing—it’s rare and very hard to come by. And then I’ve got an Elektron Analog Rytm, that’s where I get all my drum beats from.

My place of birth is: Bega, New South Wales, Australia

My hobbies are: I like to travel. I go to India, a lot of little sacred spots I like to go to. I love Guatemala, I like travelling there a lot to escape from everything. Apart from that, I’m so busy with music I don’t have time for much else. It’s my passion.

My first DJ gig was: When I was 18, I moved to Bathurst, New South Wales. It was a university town, and there was a pub there—I just started playing there for all the uni kids. It was a loose place, there were $2 beers all night.

My greatest accomplishment outside DJing is: Well, I never finished university, but I grew up on a dairy farm, so I think transitioning from being a farmer to being a DJ. I’m still young.

My oddest habit is: I have a few, actually. Sometimes I over-clean. I overdo it. I’m obsessed by it. Then I get super stressed that everything’s off.

The reason I got into DJing was: When I was like 13, I started hearing electronic music, and I was like, this is awesome. Then I started producing, then a couple years later I started DJing as well. I just loved to mix. From there, the passion grew more and more, but I never really expected to make it, so when you kind of do, you don’t really believe it.

The last good book I read was: Be Here Now by Baba Ram Dass.

The biggest influences on my DJing include: I listen to a lot of Afro-house, that’s kinda like my vibe. A lot of like Ame, the Innervisions label—kind of a more house-y side of things. African artists like Ali Farka Touré. I love all the traditional African music and stuff like that.

My greatest unfulfilled ambition in music is: I think my goal is just to continue what I’m doing and always enjoy it. As soon as it starts feeling like a job, there’s no point in doing it.

The worst part of being a DJ is: The flying. I had nine flights this weekend in four days. It tires you out. There’s this weird transition between going from playing a club or a festival and it’s high energy, and then all of a sudden going to an airport and it’s bright white lights, and no one’s really that stoked to be there.

The best part of being a DJ is: When you play a show and it’s really epic.

The one thing I really want the world to know about me is: That I grew up a farmer.

There are no posts to load at this time.